Yoga Nidra is one of the practices of tantra yoga/ Saivism. Other traditions that also practice yoga-nidra, or describing similar states of consciousness through meditative practice, are Mahayana and Vajrayana Buddhism, Patanjali’s Yoga Sutras, and Shankaracharya’s Yoga Taravali.

The ancient scripts speak of yoga nidra as a state of mind and not a technique or process. The state is not easily reached, it requires a lot of training. It is a state while your brain produce delta waves, you are in deep sleep, yet aware and present.

Yoga Nidra means the state of ‘dynamic sleep’, in which you focus inwards and stay aware. It is a state beyond being awake and also beyond a dreaming state and beyond a hypnogogic state. Swami Satyananda, of the Bihar School of Yoga, says: “Because yoga nidra brings about a state of sensory withdrawal, many people think it is a form of hypnosis. But the truth is that these two are totally different sciences. . . . The state of mind achieved in yoga nidra is far beyond hypnosis, but when the mind is dissociated from the sensory knowledge it does pass through a hypnotic state.”

Yoga Nidra was taught by the ancient sages for the purpose of exploring the deep impressions or samskaras, which drive our actions or karma. They taught this so that sincere seekers can purify the deeper aspect of the mind-field, which is accessed in the formless state of conscious Deep Sleep. So thoughts, before they become forms/thoughts, can be detected, explored and ‘loosened’, so they do not have such grip and influence anymore.

There are 4 states: waking state, dreaming state, deep sleep and turya, which is the enlightened state. Yoga Nidra refers originally (in the ancient scripts) to the 3rd. The brain waves in this state are delta (as compared to wakened state: beta waves, meditation/hypnosis state alpha or theta).

Nowadays, yoga nidra is most often referred to as a relaxation method. Swami Satyananda has created a systematic practice that has had a lot of influence on how the word ‘yoga nidra’ is used. It displays commonalities with clinical hypnosis, mindfulness meditation, guided imagery, and relaxation training as practiced in the Western psychotherapy. 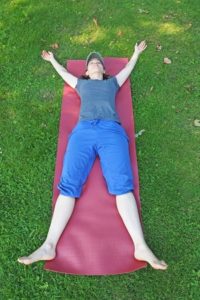 Yoga nidra as ‘technique’ mostly first brings you up until the state between sleeping and being awake and your brain waves alter to the relaxing alpha waves. By this, you learn to relax consciously without falling asleep.

The relaxation covers all aspects: as well physically, mentally as emotionally. Because of the deep relaxation, contact arises with the subconscious and unconscious level and therefore, it can have a therapeutic effect.

The mind is especially receptive in this state, which psychologists call the ‘hypnogogic state’. Transformation takes place while you consciously relax, and release of tension, relaxation and peace of mind are the key.

There is a beautiful basic relaxation technique, in which you make 3 rounds through your body with your awareness, from your toes to your crown.

The first round is relaxing the body part, let it be heavy, sinking into the ground. The second round is squeezing all the muscles in that part, keep it, and relax it deeply. The third round includes auto-suggestion while you allow yourself to relax completely yet stay aware. ‘relax my (body part), my (body part) is relaxed’. Also, thoughts, feelings and energy can be relaxed just like body parts.

The effect of singing

When the autosuggestion is sung, it has an even greater effect, as then more areas in the brain are stimulated.

An audio file for you

I audio-recorded this one for you, so that you can enjoy and use it whenever you like.

You are very welcome to listen to it live in a yogaweekend, a yoga holiday or  in one of the deepening midweeks in which you can also learn to guide this relaxation technique yourself.